Jesus and the road... 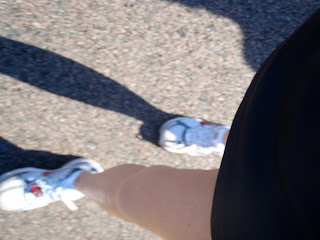 Sunday, what a beautiful day that was. The weather. The sunshine.

*Have you ever had that kind of a day, when every where you turn it seems like the world is against you? Like you can't do anything right, and everyone just says the wrong thing, some mean to...some don't even know. But, regardless, it's enough to just get you in a bad mood?!

Well, before even noon...that was the kind of day I was having. Scott was so funny....he recognized it quickly...and just let me "do my thing".

So, I put my tennis shoes and my praise music on...and I hit the road. Literally.

Mile after mile, I listened, it sunk in. Every song. Every shuffle.

Jesus is the only one that won't let me down. He won't be mean to me. He won't do anything to make a bad day worse. He just won't.

The road is always constant. It is right there, under my feet, every single time I step out.

So, at about mile 4...Scott brought me a bottle of water...so sweet. But, I thought then, even him. It's NOT fair to put that kind of pressure on him. He is going to let me down, just like I let him down..but he is there for me, to lift me up when I need him. But, he is human.

I guess the crazy part is, 10 miles later...I was still running. And thankful!

But, back to Jesus and the road.
Always true.
Always constant.

And the best part is, I can have them both at the same time!

certainly have had my share of those days!! Pastor Chris is doing a series at church now about how to live through a bad day. it's been great!! each sunday i hear something else i needed to hear. you should check it out online! good stuff!

Been there. I should probably start running when that happens to me. I'd be thin in like a week and a half.

I really love the sentiment of this post though; great message!

I was supposed to read this today. I'm in a funk. No one likes me, everyone is mean to me, I am not capabale of meeting all of the expectations others put on me much less the ones I put on myself. And I'm having a bad hair day.
So yeah. I've been there. I am currently residing there, but you are so right, b. And this afternoon when I bust out of work and go do my pitiful little C25K jaunt, I will think of you and remember that Jesus likes me (loves me, even), is not mean to me, and HE alone is capabale of meeting all of the expectations. Plus he likes my hair. He even knows every hair on my head. (And that's a whole lotta hair.)
Thank you for lifting my spirits today. xoxo