A mother's worst nightmare--
"Mom...I had a wreck"

Actually, it was a text:

Needless to say, I was not in my right frame of mind.....and I was on the phone with my sister.....giving her the low-down on my sick-self.

And the crazy part is, that was the BEST way. That kid of mine, he knows me.

--He told me where he was and that a friend of mine from high school was with him. Already?! Wow! So thankful.

Anyways, I rushed BEHIND THE SLOWEST PAWPAW DRIVER IN AMERICA-----

And I turned the corner to a Fire Truck, lights flashing, his horn was stuck LOUD, police car, lots of traffic......

Whew! I spotted him. Standing up. Away from the truck.

My sister in law, Chanda, was already there...taking care of him. And being the mother to him. Praise the Lord for sisters!

The long and short of it is: 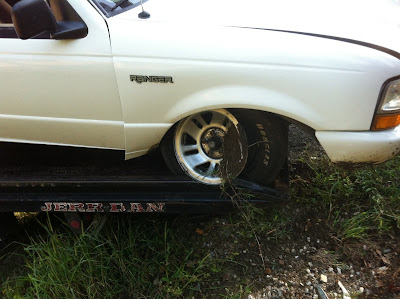 So, he said "I just held the wheel, and tried to keep it from going left into the other lane"

Then he finally got off the road and the airbags deployed (thank you makers of those) and ultimately, he hit the ditch.

The truck is totaled.

No one was hurt.

Thank you Jesus. Thank you til the end of time.

No, we did not have full coverage. Just liability. 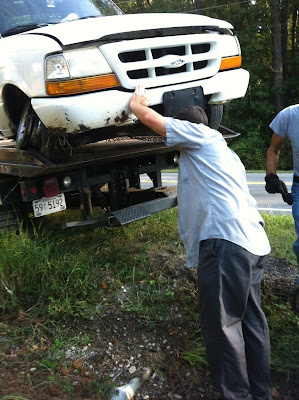 So, the adventure for a new vehicle will be a painful one. But,that is ok. God is in control. It is just metal.

Anyways, I was reminded by my friend Amy, of this blog post......about when he got his license..just a few short weeks ago....and it all means even more now. Wow.

Again....tonight.....no sleeping because my meds have made me crazy, I can't breathe, my mind is in a thousand directions....

I am reminded that life is short. Kids grow up. Moments with them are precious and so much of the day-to-day crap does not matter.

I hugged him a few extra thousand times tonight....and just told him I loved him. Period.

It was fun while it lasted.....and now.....off it goes into little junk yard heaven. Poor Thing. 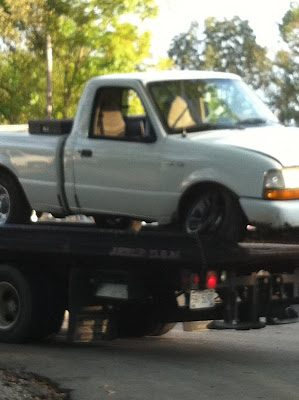