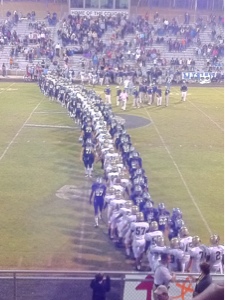 We always like to cheer on the guys as they come OFF of the field after the game. Even after a loss. To tell them we are proud of them and we stand with them, win or lose.

So, tonight, after the crowd had cleared out and most everyone was gone...I saw something.

Scott was chatting and I was just standing, watching the world go by and I noticed...I noticed one of the coaches call our QB over to him, and he said "you played a great game. Be proud. Hold your head up"

And they chatted some more and they were quiet.

But you know what, he didn't have to do that. He could've been the typical jerk-coach that lets that kid hold his head in shame as if it was all on him. NO. Not this coach. Nope. He gave him something to smile about and be proud of.

So I drove home, just myself, and it really made me think of what a difference a year can make.

Last year, our guys would've rode the bus home in silence and in defeat. But tonight. Their coaches told them they were proud of their effort and follow-thru.

Our guys know they lost. Believe me. They are beating themselves up enough.

I am so so thankful that we have some of the best coaches ever!!

Hey, our record is not stellar, but our guys are. And we are building an awesome football program, and some awesome young men in the process!!!