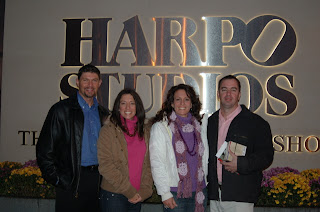 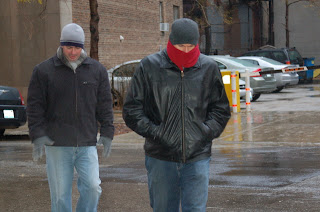 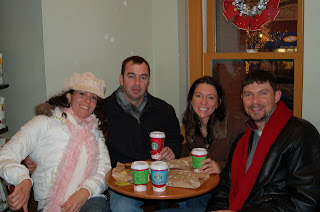 So, the 2nd show was a follow up to the Fave Things show that was taped in Macon. The producers let us know that we were NOT going to be overloaded with prizes, but we needed to be happy for those that were!!! ha, ha! so funny!

Anways, this WAS an interesting show, and very fun to be seeing the behind-the-scenes first hand! Then, Paula Deen made her way to the stage to cook the most delicious cheese ball that I have ever had! It was just in time for Christmas! The entire cheese ball is red and green! How fun is that!

Yes, we got to taste it! Yummy!

Then, bring out the cupcakes. I had been just dying for these, and then, viola! Oprah just springs them on us! Oh my! Those things were the best ever!
Then, the surprise! That Oprah! Just can't get enough of her! My heart was about to just explode. Kristin and I did a major "sandwich hug" on Scott!
So, then, Josh Groban sings Little Drummer Boy as an "after the show" deal for the people in Macon!
Ending the show with all of the Oprah staff for the Macon show, and a round or two of Jingle
Bells. Seriously, did I just sing Jingle Bells with Oprah? Really?
Ok, that's about it! Out the door, and take a few pics by the Harpo sign. Taxi to the hotel, and the day is done.
This was by far one of the best days of my life. Crazy huh, but true! And, Scott got to experience it too. Last time, Kristin and I were just spilling over, and I know that Scott and David did not have a clue. But, now they do!
Ugh! How fun! Love that!
God knows the desires of my heart.
More to come........................
Posted by Just call me "B" at 9:28 AM