Randy Houser - They Call Me Cadillac 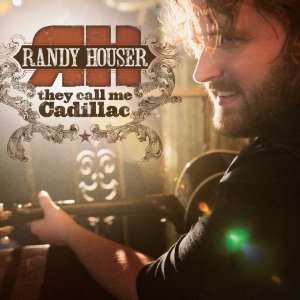 So, it only took me a second to remember that the sound of his voice, mixed with the mad skills of the musicians he works with, is enough to keep me listening all day!

This CD is NO exception! His talents are crazy good, and Country Music is just that much better because we have the likes of Randy Houser!

Not to mention, that his bad boy look mixed with his country boy charm, is enough to make me swoon, driving down the road!

What? Another track or two...yes, please! I'll keep listening!

I also love that you can find some of the background info on the songs on his site.

"My buddy Davidson just started calling me 'Cadillac' one day. Everybody asks me how he came up with that name, and I just tell them "it's because I like everything real smooth. I like everything laid back like that. I don't like anyboyd messing with my good time'! Along those same lines, Brice [Long] and I were on the bus and I started playing that bluesy lick and the verse just came out. "I've been known to lay around all day...." The rest of it came flying out, like it was one of those things that just cosmically happened. I couldn't think of a better name for the record."

The history on this project:
Randy Houser's second album, They Call Me Cadillac

, will be released Sept. 14 by Show Dog-Universal Music. Houser wrote the first single from the album, "I'm All About It." Lee Ann Womack sings harmony on one of the tracks, "Addicted." The album was co-produced by Cliff Audretch and Mark Wright. "I put my heart into this record," Houser said. "We went into the studio with a direction in mind, conceptually, for the album, and the result is something I'm really proud of. I think people are ready to hear real country music again, and I'm one of them." Houser's hits include "Anything Goes," "Boots On" and "Whistlin' Dixie."